Riding past fishing lakes near the Castle of Lupinari 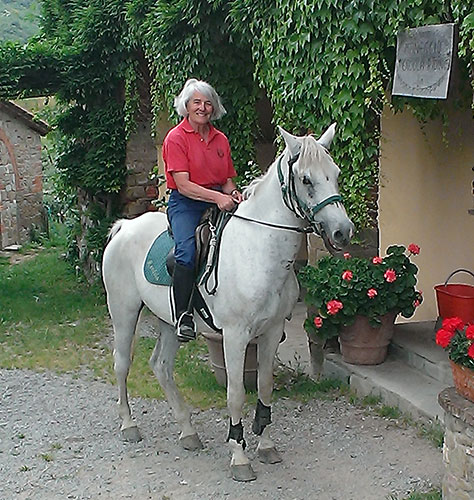 This is Jenny Bawtree, who founded Rendola Riding way back in 1969 and is still at the helm. She describes herself as ‘middle-aged’, saying: “I’ll describe myself as elderly when I have to stop riding!” Which at the moment is far from the case, as she leads most of the rides and treks organized by the Centre.

Jenny has an Oxford degree in languages and  spent four years teaching at the University of Florence. She set up the riding centre because she wanted to transmit to others her love of horses and the Tuscan countryside. She is quite knowledgeable about the local history, art and architecture as well as the flora and fauna.

In 2015 Jenny wrote to his autobiography “Tuscany on Horseback” and after a long research throughout Italy he completed “The cycle of the months: a journey to discover a little-known treasure of medieval art”. He is currently working on the translation of the book into English..

“Jenny, let me say right off, was the best leader of a ride I’ve ever experienced – and my experience of such rides is by now fairly extensive. She was knowledgeable about everything local and Tuscan: the birds, the plants and flowers, the cuisine, the agriculture, the history, the art and so on. One of our number was a cyclist and went on her own excursions that were mapped out for her in advance. The fact that Jenny are her staff could make a non-rider comfortable says a lot for the fact that the whole place is geared to making any guest’s time there very special and memorable… Jenny shaped the way in which I enjoyed my first encounter with Italy and I feel great gratitude to her.”

“Jenny has a wonderful knowledge of Italian as well as an interest in art history. This resulted in experiences I didn’t expect, such as a seminar in the pronunciation of Italian, fascinating tours of ancient churches and reading recommendations which enhanced the whole experience.” 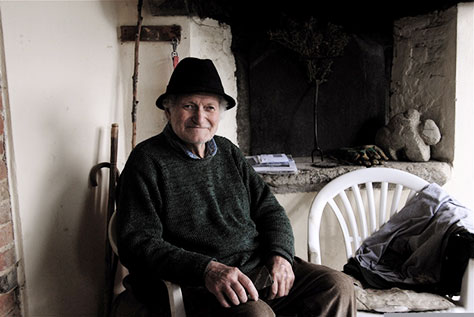 Together with Pietro Pinti, cook at Rendola for more than thirty years, she wrote his life-story, which reveals the hardships, but also the joys of farming between the thirties and the seventies. Originally published in Italian, the English version (Pietro’s Book) was published by Constable in 2003 and the American edition, published by Arcade Publishing, came out in 2004 (they also produced an audiobook).

“This is a very valuable book, not only for its autobiographical content but also for its evocation of the rural world of the last century..”

It was Pietro’s answer to “Under the Tuscan Sun”!  Sadly he died in 2011 at the age of eighty-four.

This is Marco who has been working at Rendola for 6 years. 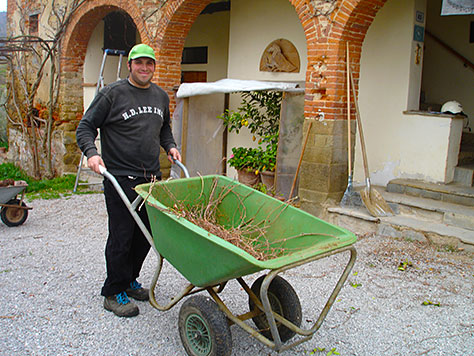 As strong and reliable as his father, he is responsible for most of the stable work and also helps in the fields and in the kitchen.

He is known for his broad smile, his great sense of humour and his willingness to tackle the most arduous of tasks.

This is Nicholas, Jenny’s son. He works in Florence and for some years has been the Editor of an ecology magazine, Terra Nuova. 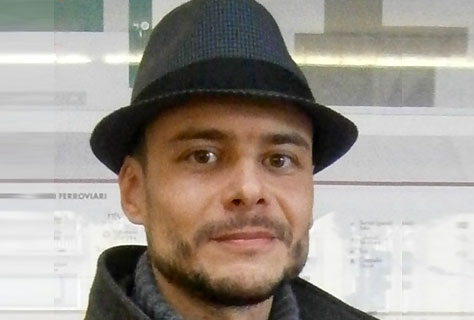 Although he decided some years ago that a career with horses was not for him (he wanted to be a journalist already at the age of eight) he shows great interest in our activities and is always ready with good advice. He also helps Jenny when she has problems with her computer (which happens frequently).

Now he lives at Loro Ciuffenna on the other side of the valley with his girlfriend Michela, who is a professor of statistics at Florence University.

This is Eraldo Tuveri, our instructor, who comes from Sardinia.

He first came to work  at Rendola in 1995, and then went to England for ten years, where he qualified as a British Horse Society instructor.

“Eraldo is an excellent horseman and guide. He charmed us with his delightful ways and provided many laughs.”

He has been back at Rendola since 2005 as instructor and guide. He is very knowledgeable about the local fauna and is always happy to talk about it with the guests of the Centre. He married pretty Martina two years ago and they now have a baby son, Laerte Raduel. Since 2018 he is the sole responsible for horses and all activities related to horses

This is Franca, our jovial cook. 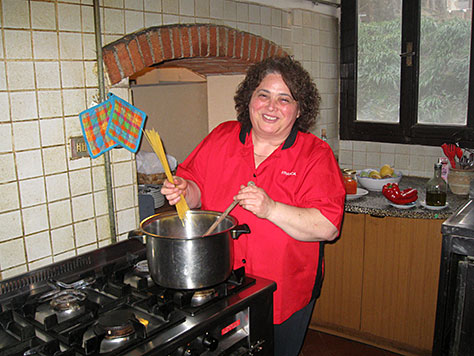 She was born in Sicily but came to live in Tuscany when she was a small child. From her mother she learnt how to prepare Sicilian dishes, but she is also expert in Tuscan cuisine. She adores cooking and likes to give personal, innovative touches to traditional fare.

For four years she has been running cooking classes designed for foreign visitors.

“Franca is the most delightfully friendly lady who prepares the most exquisite meals, almost always from home grown and local produce.  Whether it is a delicious lunch to keep you going through the afternoon or a scrumptious dinner to round off another perfect day, you will never be disappointed.  Franca, you are a very special lady, thank you very much.”

Trekking on horseback in Italy